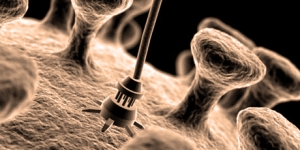 Nanotechnology has emerged as a potentially novel and promising way of combating a number of human diseases including cancer in early and late stages – from cell detection and targeting, to drug delivery and cell imaging. Several approaches have been taken to advance various nanoparticle designs to maximize efficiency while consecutively abating toxicity. Nanotoxicology has emerged as an autonomous field of toxicology in 2004. Since then, the number of publications skyrocketed from 89 to 5120 in 2016. This emphasises the necessity to review the major achievements vs. the unrealised promises. A new special issue of TAAP (Toxicology and Applied Pharmacology) represents a forum in which a group of leading scientists have reviewed the most important topics relevant to the translation of currently available experimental data to human hazard and risk assessments.

Anna Shvedova of Nanosolutions was delighted to serve as guest editor for the special issue of TAAP “The First Decade of Nanotoxicology: Achievements, Disappointments and Lessons”. This edition (Volume 299) is available here and includes highlights such as Nanotoxicology ten years later: Lights and shadows, New frontiers in nanotoxicology: Gut microbiota/microbiome-mediated effects of engineered, and many more.