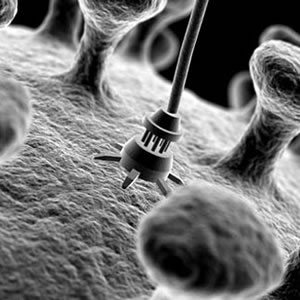 Engineered nanoparticles (ENP), defined as having at least one dimension ≤100 nm, have attracted a great deal of interest during recent years, due to their many technologically interesting properties.

The unique properties of ENP and their applications have given birth to immense technological and economic expectations for industries using ENP. However, some of these properties have given rise to concern that they may be harmful to humans.

This has prompted scientists, regulators, and the industrial representatives to investigate the features of ENP in order to be sure of their safe use in nanotechnologies (NT), i.e. technologies utilizing ENP.

The European Commission has also explored in-depth the characteristics of ENP and issued a document on ways to assure the safety of ENP.

The overarching aim of the NANOSOLUTIONS consortium is to provide a means to develop a safety classification for engineered nanomaterials (ENM) based on an understanding of their interactions with living organisms at molecular, cellular and organism levels.

The main objective of this research proposal is to identify and elaborate those characteristics of ENM that determine their biological hazard potential. This potential includes the ability of ENM to induce damage at the cellular, tissue, or organism levels by interacting with cellular structures leading to impairment of key cellular functions. These adverse effects may be mediated by ENM-induced alterations in gene expression and translation, but may involve also epigenetic transformation of genetic functions. We believe that it will be possible to create a set of biomarkers of ENM toxicity that are relevant in assessing and predicting the safety and toxicity of ENM across species.

The ENM-organism interaction is complex and depends, not simply on the composition of ENM core, but particularly on its physico-chemical properties. In fact, important physico-chemical properties are largely governed by their surface properties. All of these factors determine the binding of different biomolecules on the surface of the ENM, the formation of a corona around the ENM core. Thus, any positive or negative biological effect of ENM in organisms may be dynamically modulated by the bio-molecule corona associated with or substituted into the ENM surface rather than the ENM on its own.

The bio-molecule corona of seemingly identical ENM cores may undergo dynamic changes during their passage through different biological compartments; in other words, their biological effects are governed by this complex surface chemistry. We propose that understanding the fundamental characteristics of ENM underpinning their biological effects will provide a sound foundation with which to classify ENM according to their safety.

Therefore, the overarching objective of this research is to provide a means to develop a safety classification of ENM based on an understanding of their interactions with living organisms at the molecular, cellular, and organism levels based on their material characteristics.