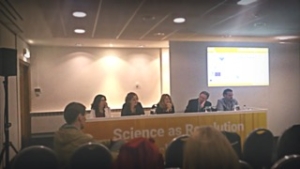 Nanosafety experts from Nanosolutions and other EU projects took part in a fascinating presentation and discussion session at the EuroScience Open Forum – ESOF 2016 – in Manchester, UK, on Wednesday, July 27. The session was hosted by Kai Savolainen of the Finnish Institute of Occupational Health, alongside the Academy of Finland. ESOF is one of Europe’s largest events focusing on science communication and this year saw more than 3,000 delegates pass through its doors.

Called The Small Matter of Safety – Responsible Use of Nanotechnology, this nanosafety session focused on the latest work being done to find effective ways to assess the possible risks engineered nanomaterials (ENM) may have on human health and the environment.

While the small size of nanoparticles gives us the potential to develop ever more versatile and useful product characteristics, their size also means that they can easily penetrate the skin or enter circulation through the lungs. Many, of course, will be totally harmless, but there is a risk that some may not be. With the commercial use of engineered nanomaterials continuing to grow at a rapid rate, the need to identify the potentially harmful risks some of these materials may pose has become more urgent.

Current methods to test the impact ENMs have on human health and the environment is both time-consuming and extremely expensive, which has led to a number of initiatives looking to speed up the testing process and make it more cost-effective. Such a system would allow further, safer commercialisation of nanoproducts and would inevitably speed up the innovation process, while protecting workers, consumers and the environment from potential harm.

After an introduction by Kai Savolainen, which set out the contextual background for the discussion and introduced the work being done by Nanosolutions, Emma Martín Rodriguez from the Autonomous University of Madrid went into more detail about what nanoparticles are and how things behave in the nano world – very differently to how things behave at a larger scale. Quantum dots, for example, are nanoparticles whose optical and electronic properties differ from those of larger particles making them useful in a variety of applications from solar cells and light-emitting devices to medical imaging. Some, however, are toxic and there are still questions to be answered about our understanding of the risk they pose.

Socorro Vázquez-Campos of LEITAT Technological Centre in Spain and part of the Nanosolutions project then explained the importance of life cycle assessment in the testing of toxicity potential. Just how much are we exposed to these particles through the everyday use of the products that contain them? Nanosolutions, she explained, has been conducting experiments on several of these products to assess how the ENMs are released during their life cycle – from inks in printers and from clothing through washing, for example.

With millions of possible ENMs in the world, each containing thousands of different particles and fibres, Andrea Hartwig of the Karlsruhe Institute of Technology in Germany recognised that it is impossible to test every particle type. Her talk focused on high-throughput screening techniques that evaluate the toxicity of groups of similar particles. This is increasingly being used in nanosafety research as a means of collecting the huge amounts of data needed to predict possible harmful impacts.

It was this big data that was at the heart of the conclusion of the session, when Dario Greco of the University of Helsinki and Nanosolutions introduced the exciting outcome of the project – the Nanosafety Classifier.

Working with just 31 ENMs and assessing their molecular and bio interactions and their toxicological effects on a variety of biological systems, the project emerged with eight million data points. The central idea was to select a few common features from this data and predict their safety risk using evolutionary algorithms that continue to explore these features until just 11 biomarkers are identified. Using these biomarkers, it is expected that any new ENM can be tested, quickly and more cost-effectively, by the Nanosolutions classifier tool, meaning industry can reduce the cost of innovation and that the public can be confident that nano-products are safe to use.

The Nanosolutions project comes to an end in February 2017 but, as Dario Greco concluded, the work to assess the safety of nanoparticles does not end then. Data needs to be shared across the many projects working in this field of study to develop more reliable models.