Home/Latest News, Timeline Progress/Small clumps in the body: how nanoparticles react to proteins 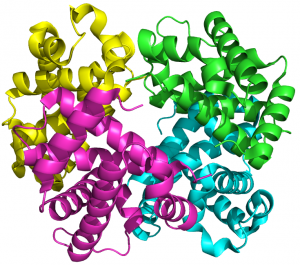 Scientists at the INM – Leibniz Institute for New Materials have found out that the protein haemoglobin influences the aggregation of individual gold nanoparticles to form clumps.

James Bond can be located anywhere. He owes this fact to the nanosensors that find their way into his bloodstream by way of injection in the film “Spectre”. In the real world, too, work is being carried out to achieve this vision. In the blood circuit, there should be no uncontrolled clumping of particles so that fine blood vessels do not become blocked. Scientists at the INM – Leibniz Institute for New Materials have now found out that the protein haemoglobin influences the aggregation of individual gold nanoparticles to form clumps.

When nanoparticles approach and attract each other, they become unstable and form large flakes, visible to the naked eye. Or they remain stable, and each nanoparticle remains separate. This was the opinion of researchers up till now – it was all or nothing. That these are not the only possiblities has been demonstrated by the researchers at the INM: They have discovered that an intermediate status is also possible, where nanoparticles aggregate to form microscopically small, invisible clusters.

The researchers of the INM and the University of Bayreuth recently published their findings in the journal ACS Nano.

Tobias Kraus, a physical chemist at the INM, commented, “The results are of interest in medicine: nanoparticles are used today to bring drugs to precisely where they are needed in the body. This requires that the particles do not aggregate. Only then can they move through the fine ramifications of the blood vessels, for example. Our results show that special care must be taken, since aggregates could be present even though you can’t see them,” says Kraus.