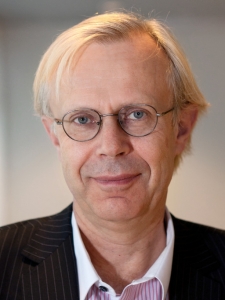 The opening keynote lecture at The Systems Biology in Nanosafety Research conference, taking place at the Karolinska Institute, in Stockholm, brought the perspectives of a material scientist to the forum with a fascinating talk by Professor Olli Ikkala.

Professor Ikkala, of the Department of Applied Physics and Centre of Excellence of Molecular Engineering of Biosynthetic Hybrid Materials at Aalto University in Finland, began his talk by enthusing about the “amazing” qualities of biological materials. He used the examples of silk, “as strong as turbine steel” and calcium carbonate, “so tough” and the colours of a butterfly to declare that: “Nature is brilliant at materials!”

His point was to bring the material scientist’s viewpoint of how the development of functional nanomaterials, where the emphasis has involved different shapes, sizes and compositions of nanoscale particles, much like those found in nature. Diblock copolymers, DNA origami, colloidal assembly, artificial amyloids and liquid crystals were just some of these developments that he believes will have functional use in the near future.

Of the nanomaterials that have attracted significant interest recently, Professor Ikkala explained the mechanically strong nanocellulose as an example. They consist of a few nanometer diameter fibrils of native crystal forms of cellulose, as extracted from plants or wood. Already, functional uses have been identified, such as surface composites, films, lightweight porous foams and scaffolds on which to grow stem cells.

Other applications were also identified, such as the use of certain “glue-like” compositions for wound healing and aerogels, where all the water has been removed from the structure of the material, which show dramatic promise for thermal insulation and as a flame retardant.

Professor Ikkala continued to explore the potential for nanomaterials by examining the potential of combining the best of nature’s nanocellulose, which is strong, sustainable and flexible, and carbon nanotubes, which is also strong but also an excellent electrical conductor. Here, he identified their promise as the next generation of flexible electronics – “the next big thing,” he declared, predicting flexible electronics, e.g. smartphones to emerge on the market.

Another exciting possibility using this combined approach is the use of nanofibrillated cellulose aerogels for a coating a sponge-like material that both floats and absorbs oil, to be used as a solution for clearing up oil spills on the sea.

Finally, Professor Ikkala warned that a huge amount of investment is needed in this area to realise all the possible benefits available. Japan, he said, was investing widely, with companies like Toyota already using the potential of clay nano particles with some of its existing car parts, with many more nanocomposite parts on the horizon.

The talk formed a useful backdrop to the conference by clearly demonstrating the enormous potential nano materials offer all areas of society and the huge amount of these materials that can be developed for many uses. With this in mind, the issue of safety and the need for the concept of safe by design become more pertinent and it is these issues that the conference continues to debate.